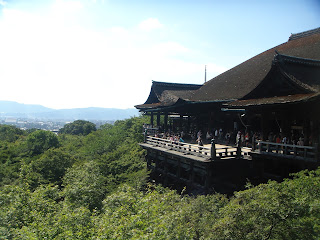 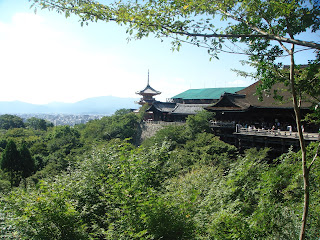 The Kiyomizu-dera 清水寺 in Kyōto is probably the most famous temple in Kyōto along with the Kinkaku-ji 金閣寺. Both attract a large numer of tourists and charge an entrance fee so there is not much of a monastic atmosphere. Nonetheless, the atmosphere at Kiyomizu-dera is far more ‘religious’ than the one at Kinkaku-ji. Apart from the main temple there is a Shintō shrine where deities for all kinds of purposes are enshrined. In spite of (or perhaps because of?) the large number of tourists, there are several beautiful examples of authentic folk religion. 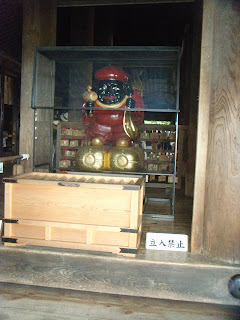 A statue of Daikoku-ten 大黒天, a Buddhist deity I have mentioned  several times already in previous blog entries. When I first saw this particular statue approximately four years ago, I was immediately reminded of Saint Nicholas’s helper “Zwarte piet” in the Low Countries. Apart from the black face and the red lips, this statue also carries a bag just like Zwarte Piet and a hammer which comes across slightly aggressive like Zwarte Piet’s birch rod. Interestingly, both are said to come from afar in a boat (the takarabune 宝船 in Daikoku-ten’s case as a member of the Seven Lucky Gods and Saint Nicholas’s steamboat in Zwarte Piet’s case) carrying good luck and wealth/presents in the month of December (around the New Year/ the beginning of December). 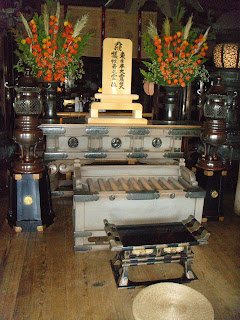 An altar with an ihai 位牌 for the victims of the 2011 earthquake in North-East Japan. On top one can see a Siddhaṃ character (Jp: 梵字 bonji) that is pronounced “krīk” and symbolises the Thousand-armed Kannon or Sen-ju Kannon 千手観音, the main idol of the Kiyomizu-dera. 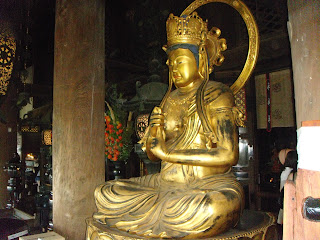 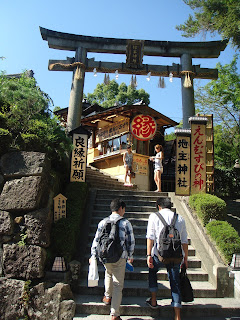 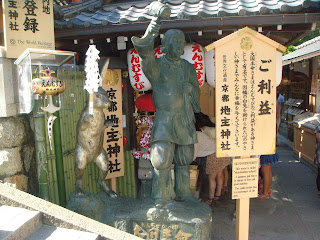 Ōkuni-nushi no Mikoto 大国主命, the god of matchmaking, and his helper the White Hare of Inaba (因幡の白兎 Inaba no Shirousagi). There are signs that there has been confusion between Ōkuni-nushi no Mikoto and the aforementioned Daikoku-ten because of the characters 大国 and 大黒 both having “Daikoku” as a possible reading (Miyamoto, 1987: 45). As a result, Daikoku-ten, who is originally a Buddhist deva देव, acquired some Shintoist traits (like being enshrined in jinja 神社, or on the Ebisu-dana 恵比寿棚 alongside Ebisu). Note that both Ōkuni-nushi no Mikoto and Daikoku-ten carry a bag over their left shoulder and a hammer in their right hand. 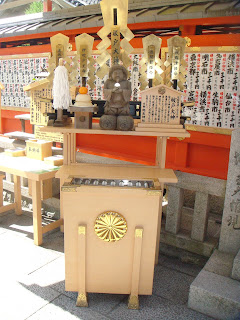 An altar with five gohei 御幣 each representing one god, with the largest one in the middle representing Haraedo-ōkami 祓戸大神, a deity who wards of evil and bad luck. The small statue shows Daikoku-ten in an unusual position holding a ball made out of crystal. Visitors are instructed to touch this ball as they pray for good fortune. 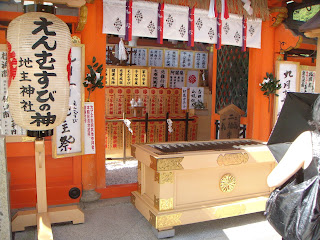 A large altar for Enmusubi no Kami えんむすびの神, the god of matchmaking, which seems to be the main theme of Jishu-jinja. 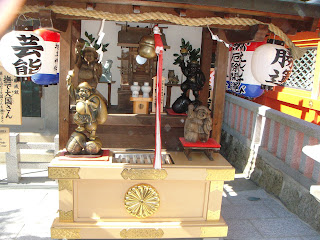 An altar with four statues of Daikoku-ten, one of which (the bronze one to the left) is called Nade-Daikoku-ten 撫で大黒天. One should stroke a different part of the statue whilst praying depending on what one is whishing for. For example, students wishing for good luck on their exams are advised to touch the statue’s head, pregnant women who wish for a smooth and safe delivery should touch his belly etc. 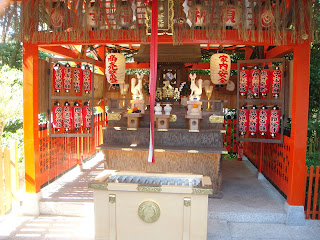 An altar to Inari 稲荷 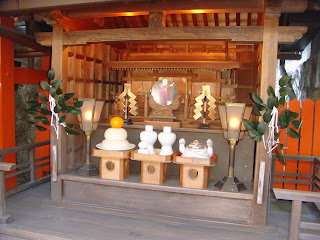 Another altar to Enmusubi no Kami with offerings of rice cake, sake, salt and a sculpture of two intertwining snakes around a gem. 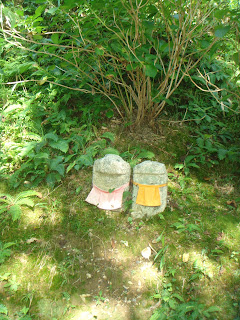 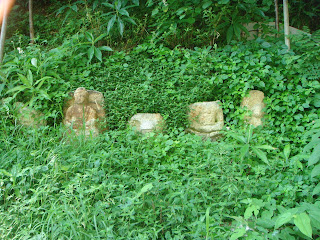 Outside of Jishu-jinja, on the temple grounds of Kiyomizu-dera, small and simple statues can be found here and there.